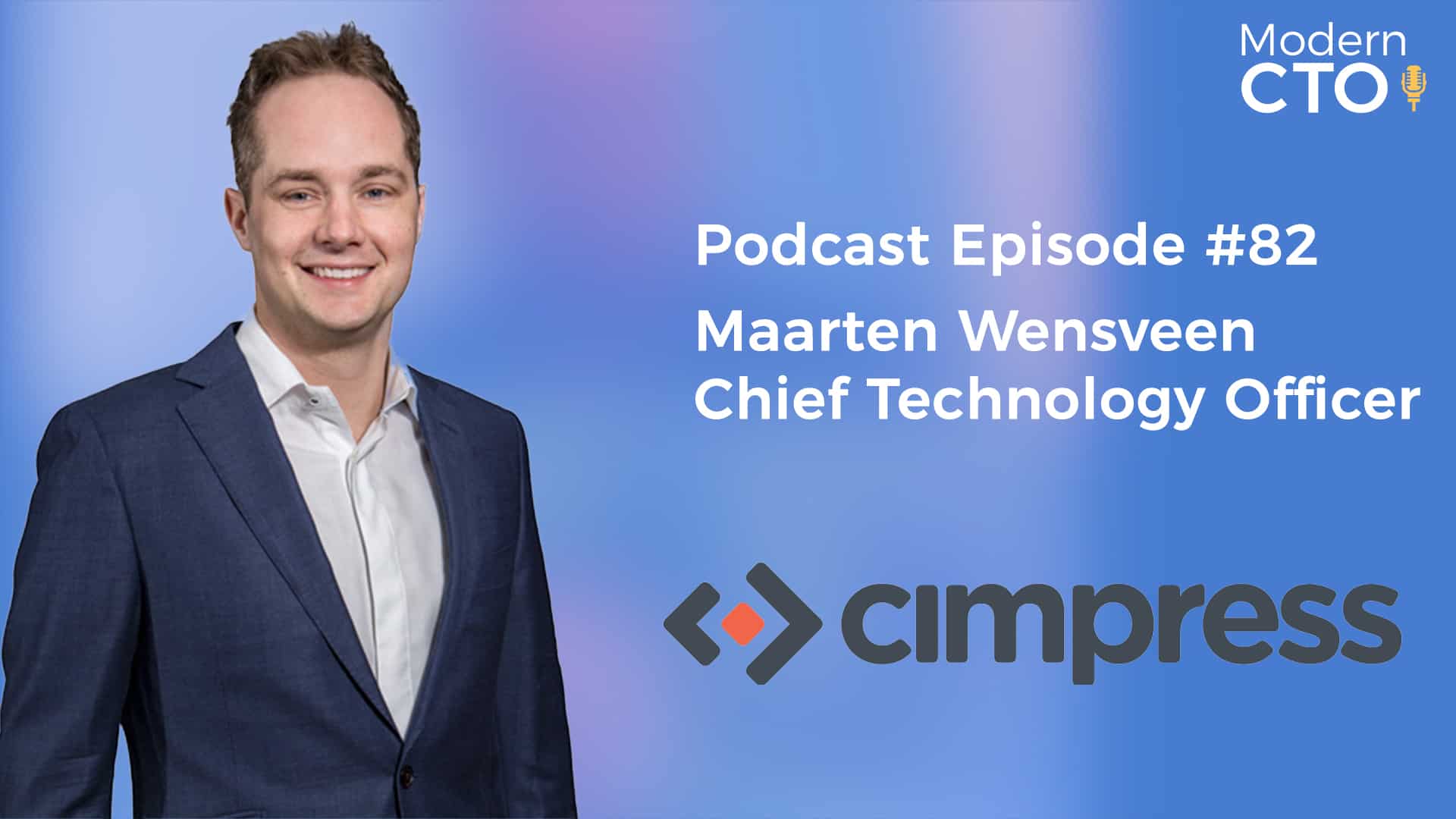 Today we are talking to Maarten, the CTO at Cimpress. And we discuss creating an atmosphere where an individual can make an impact, learning new areas of the business when you transition in to the CTO role, and how to get your point across effectively

All of this right here, right now, on the Modern CTO Podcast!

Maarten leads the Cimpress Technology team, which focuses on the development and operation of our shared mass customization platform and other technology-related strategic capabilities into which we centrally invest.

He has been instrumental in establishing a strategy and a technology architecture which ensure that our shared technology development and operating routines function in line with the priorities of our decentralized businesses.

Maarten started his first company, in the Netherlands, when he was 25 years old. Six years later he sold it to focus on Albumprinter, another rapidly growing start-up where he was responsible for developing both the software and technology infrastructure and teams.

Maarten joined Cimpress in 2011 upon the acquisition of Albumprinter, by which point Albumprinter had grown to be a top European provider of personalized photobooks.

History is littered with products who don’t engage with the customer
What’s going on at Cimpress?
What was the series of events that led you to Cimpress?
Why did they come up with the name Cimpress?
How does that shape your job?
Every business has it’s own CTO and every week do a roundtable with all the CTOs
A few company standards but mostly the companies have autonomy
Vista Print is most well known in the US what are some of the others that are well known
Did you see the billionaire who is going to the moon?
Fashion there are tons of mass customization. Short run possibility. Latest investment is VIDA
Love to make single units with mass production efficiency
What will buying clothes look like in 10 years
How do you keep the engineering team close to the physical side?
What does the day look like. A lot of talks with the business. Tribe leads. Use a lot of Spotify terminology. 12 tribes that are divided in to logical ares
What are the biggest opportunities long term and short time.
What behavior stands out as something for leadership? The enthusiasm to do good by the company. Create an atmosphere where an individual can make an impact.
Tricks to motivate the team? Make sure the business works together. People get motivated by “are people using my software?”
Everything that’s great started small. It’s a practice in patience – Joel
Being inspired by Great leaders. Distill it all together.
Excited about working on something that already had customers. Been starved for people using the platform
Technology is one of the driving forces throughout Cimpress
How are you overcoming that print isn’t sexy? It gets very sexy when it’s on massive scale
People like to drive around mobile iPads to talk to people
Last investor meeting he wore a stargate shirt
Now he’s wearing a FireFly
All my friends are Dead Shirt.
Advice to Startup CTOS transitioning to Corporate CTO Focus on the people and the team around you – All about making sure the people around you are making the decisions that are best for the company. You now have to do financials, learn new areas of the business.
How do you motivate large swaths of people? How do you steer 400 people in the same direction. Communicate Communicate Communicate. Share everything you can and Set goals.
The smaller the message the faster it travels
Talk less. Find the 3 main points and make them.
The human brain isn’t made to receive on large amounts of data. Focus on the 20% you need to get across.
Elon Musk Time machine. 1 Piece of advice. What would it be? Would travel to an alien civilization. Key thing would be pace yourself in communication. Screwed up a lot of opportunities by talking to much and too quick. Get the Core things and trust that the intent is right, it will work out.