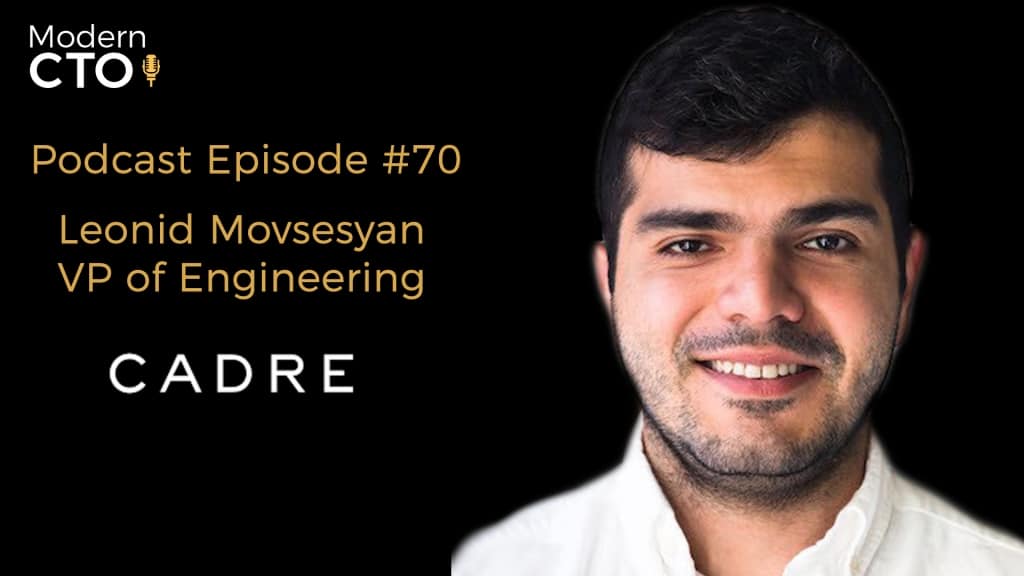 Today we are talking to Leonid Movsesyan, the VP of Engineering at Cadre. And we discuss Data driven approaches to decision making, why speed is key when having tough conversations and how practicing great calendar habits can help you to avoid losing a work day.

All of this, right here, right now, on the Modern CTO Podcast

Leonid joined Cadre as a Director of Engineering in 2017 and quickly worked his way up to VP of Eng focusing on everything from establishing the platform infrastructure to scaling the engineering team to improving the team’s release reliability to building the internal data engineering efforts.

Prior to joining Cadre, Leonid worked at Dropbox where he worked as Senior Engineering Manager and was responsible for overall reliability and infrastructure components. Prior to Dropbox Leonid worked at Yelp as a Senior Engineering Manager.
He received his Master’s in Computer Science from Moscow State Industrial University. Think he’d be able to give some interesting insight on not only scaling a platform but scaling the team behind the platform.

Cadre is an online marketplace for commercial real estate investment
Right now working just with accredited investors
Eventual goal is to create a product for everyone
Been at Cadre for almost a year
You can cut scope but don’t cut quality
Have 27 engineers at Cadre
How do you structure the teams at Cadre. Goal was to ensure that as many software engineers are working on the product as possible
Teams of 3 engineers working on security and platform
Cadre does source their own investments
Never build your own data centers – Lessons from previous companies
Bulk of their team is in NYC – Small office in Toronto. Opening a new office in Chicago
Simon Sinek has great thoughts about leadership – start with why
Advice for people making transition from IC to Manager – Learning to Let go
Give the person space to understand and grow
What are the biggest slices of your day – Spending time with Direct Reports – Spending time with Peers – Tactical things that happen on the day to day.
Do you spend time with customers? Gets information about customers desires
Using FullStory to get leverage on how to understand how a customer interacts with your product
It’s hard to get yourself out of the box and understand what a customer does
Cadre has the deals on the platform so you can invest right there
Working really hard on increasing the engagement
Giving people an opportunity to invest in a very stable and great from a return investment
Losing a work day – Is that the best use of my time? Failing fast is important. Train yourself to do things that are on your calendar and say no to the things that are not on your calendar
Only do what the phone tells you what to do.
The 30 minute break between meetings are the worst.
Motivational audio
Having Tough Conversations: Deliver some bad news. Started career in Russia and having those conversations in Russia was much harder than it is America. Regular to be transparent and open in Russia. Have to sugar coat things in America.
If you have a hard conversation, you probably did something wrong long time ago. If you’re having a performance conversation it should have been discussed long ago.
Core values is Speed. The longer you wait the harder it gets
Problems don’t solve themselves. The longer you wait the harder it gets to fix it.
Don’t get stressed out about things. If you are juggling a lot of things.
If feeling stressed, have to stop, take a break and figure it out.
How do you approach decision making? 2 types of decisions reversible or nonreversible. It has to be data driven. Can’t go on endless research. Not RnD. Make a decision about the deadline based on the business needs. De-engineering document
Make as non biased a discussion as possible
Analysis paralysis is incredibly frustrating for everyone
Important to understand they are creating the scope themselves. Don’t over-engineer the problem
Learning a lot about front end at Cadre. Used to focus more on the infrastructure. Focusing on the entire product
Spend time with the CFO and other parts of the business.
Understanding what the limitations are.
You have to learn the financial product and and write the specs according to it.
You can find Leonid on Linkedin.