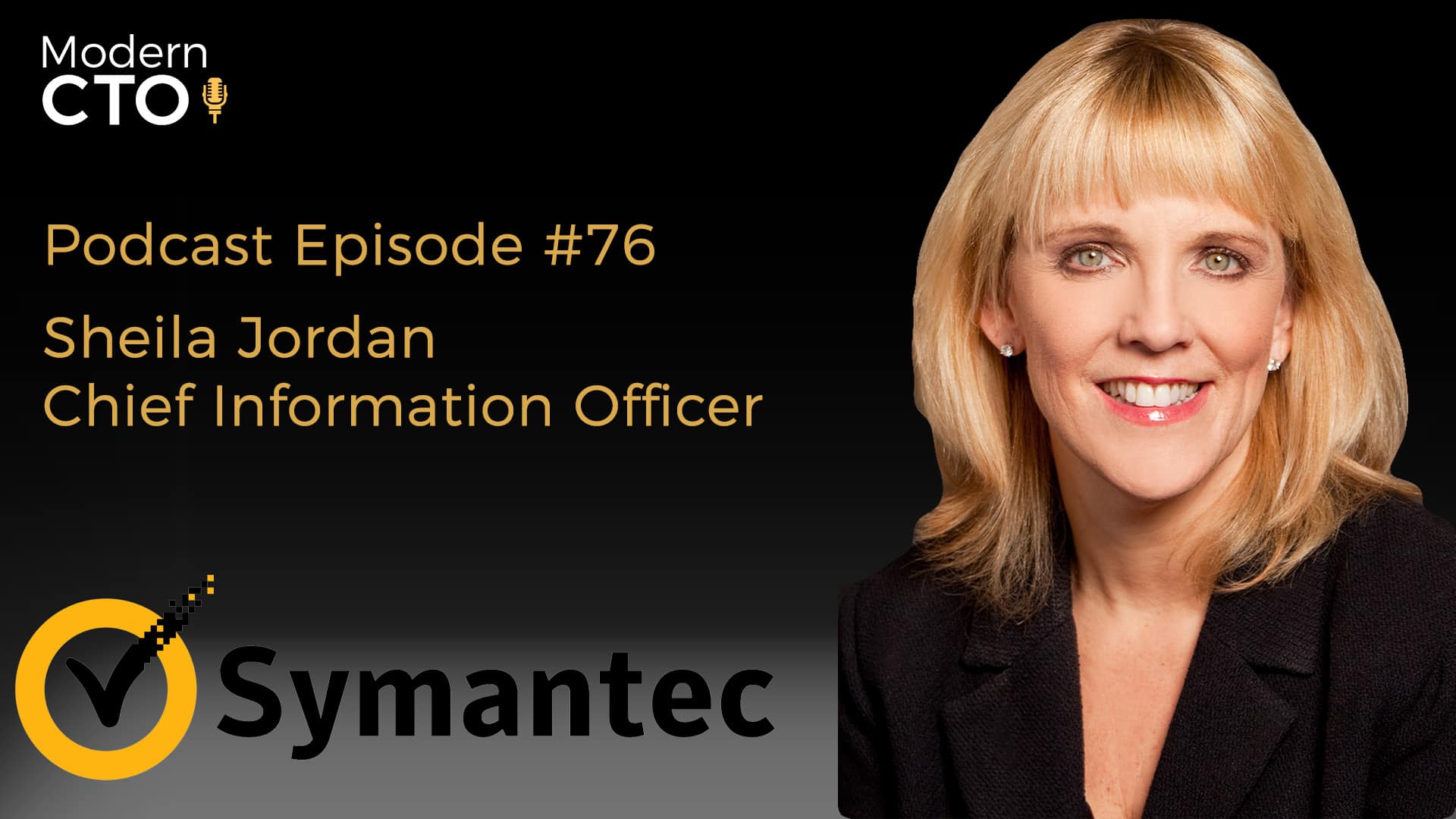 Today we are talking to Sheila Jordan, the CIO of Symantec. And we discuss their recent transformation by insourcing their IT department, locking in on strategic and critical decisions and creating an environment where people feel aligned to the mission that the organization is working on.

Sheila Jordan is senior vice president and chief information officer at Symantec. She is responsible for driving Symantec’s information technology strategy and operations ensuring that the company has the right talent, stays ahead of technology trends and maximizes the value of technology investments. Her goal is to drive increased productivity, better efficiency and strategic business partnerships through simple and intuitive experiences for Symantec’s global workforce.

Since joining Symantec in February 2014, Sheila has set the vision and strategy for Symantec IT, developed an experienced leadership team, and insourced IT operations from an outside vendor by building Symantec’s next generation secure data center in the company’s virtual private cloud. Sheila also led the effort to split IT operations when Symantec separated its security and information management businesses – a highly successful, transformative initiative accomplished in nine months. Sheila’s role includes oversight of the Global Security Office, and she has established the strategy for “all things security” in an ever-changing and dynamic landscape.

Prior to joining Symantec, Sheila served as senior vice president of Communication and Collaboration IT at Cisco Systems. Within her purview at Cisco were collaboration platforms, user experience and support, and communications, collaboration and mobility services. During her nine-year tenure at Cisco, Sheila’s IT organization was recognized by the industry with awards presented by CITE, InformationWeek and CIO Magazine. She also received the 2010 Cisco Executive Sponsor Catalyst award for her leadership in developing successful relationships with customers, including several Fortune 100 companies.

She holds a Bachelor of Arts degree in accounting from the University of Central Florida and an MBA from Florida Institute of Technology.

Goes to Orange Theory at least 3 days a week
Where are the 3 areas that you spend your day in a pie chart?
What is Symantec today?
Security industry has been very fragmented
Made an acquisition of LifeLock
Symantec has the largest security database
Has worked at Disney, Cisco and Symantec
Consider the culture, the leadership team and decide where you want to work
Has a significant intern group, spends a lot of time working with the next generation
When you walk in to a job, you are being evaluated. DO YOUR JOB VERY WELL
We want new ideas and fresh thinking. Don’t be afraid to speak up and give suggestions
Don’t be afraid to be ambitious. Nothing wrong with asking for more.
Her job is to create a whole bunch of generalists – move talent around to expand thinking
Resource Now. – Short term jobs where you can go learn new technologies
Helps keeps the talent at Symantec – they talk to each other and learn from each other
Has an annual hackathon
So much talk about innovation – thinks innovation can occur at every level of the company
Massive transformation at Symantec, Insource the IT department
Split the company in half with Veritas Divestiture and then made 6 acquisitions
Credit goes to the team – when you give a talented group of athletes a challenge they figure it out
There are so many dependencies in IT – Need to work like a winning team
Going to write a book about the positive perspectives as a working mother
Builds intern teams to infiltrate their company with new thinking
Creates specific projects that can be started and finished in a 12 week time period for the interns so they get to work on a real problem
Finding out what you don’t want to do is as important as finding out what you do want to do
Hardest jump to make is going from IC to management
You have to become less controlling of what the output is. Set the frame and let the go of the process. Be clear about the end state but not about the mechanics about how to get there.
Decision making – How do you make decisions. Divestitures are harder than acquisitions
Any time you have to make big decisions – What’s really strategic and critical and lock in on those – opinions should not alter a strategic decision – data should – be really clear about those decisions – don’t worry about right or wrong, stay the course unless new data presents itself
What catches your eye about a great leader
Looks for authenticity. If you don’t have trust then it’s hard to get the team to work like a team. Leaders have a hard job to do. They can share some info but sometimes they can’t share some because of strategic . Dancing between the clarity of how they can communicate but recognize what they can’t communicate. Be clear about what you can and can’t say.
Job is to create an environment where people feel aligned to the mission that the organization is working on – mission and the vision. Want to know that what you are working on is bigger than the individual.
Look for people who do the job really well. Empathy towards others. Aren’t in it for their own agenda. Look for positive can do ambitious attitude. Thinks why not why not. Explore ways and opportunity
CIO vs CTO at Symantec – her job is about the customer journey, partners, employees. CTO is thinking about the future